China, the world’s second largest economy has seen its economy tapering off, through the supply chain disruptions caused by brutal and rolling lockdowns caused by the China Covid suppression policies and sweeping changes to its mega tech companies. President Xi Jinping earlier this month was re-elected to power for a third term and appointed his allies in key positions of power further raised concern about the strengthening of government control over the economy and companies operating in China. Xi’s emphasis on “Common Prosperity”  indicate that the regime is leaning more towards a leftist ideology. There is no clarity whether the regime will support capitalism or free-market forces to the extent they have done in the past

But in the midst of this doomsday-like outlook, compared to 28,543 points on January 2, 2020—just as COVID-19 had started to spread—the Hang Seng traded to today’s low at 14597 is making its valuation compelling . The price to earnings multiple, a measure of valuation, has come down to 5.3 times from 16 times over the same period.  Though the valuations are attractive but investors  still lacks understanding of how things are changing on the ground and are choosing to wait for more clarity before jumping in.

Something Caught My Eye Today

The Hang Seng Tech Index ETF (3032.HK) which tracks the Big HK Tech Companies has shown sign of capitulation on unprecedented trading volume on 24 Oct which is a indicator of investor’s throwing in their last towel. The epi centre of the HSI decline has been the HK tech stocks and we are seeing some sign of short term bottoming.  There is a good potential for a 10 to 15% rebounding coming soon . 3032.HK trades at 2.89, a rebound to 3.18 to 3.40 could be on the cards in the short term 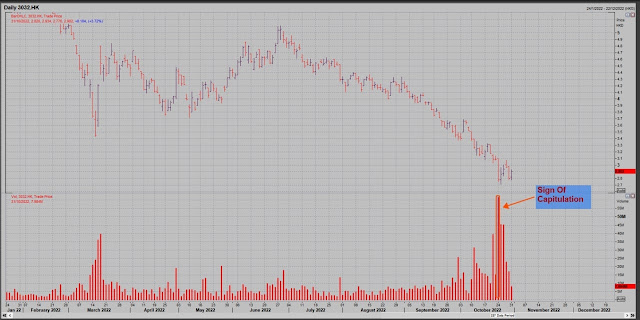 All posts and charts are for educational and illustration purposes only
at 1:46:00 PM No comments:

BYD continues to deliver resilient EV sales thanks to a strong model line-up, vertical integration and leadership in LFP batteries.

Global EV sales remain resilient as car makers are prioritising EVs and China policies remain supportive amid the energy crisis.
BYD is a battery makers with technological leadership and cost competitiveness that will help to alleviate margin pressure caused by material inflation.
BYD is breaking above its all time high of 324.60 today and will enter a path of least resistance and the "Sky is the Limit", next target 350 and 367. 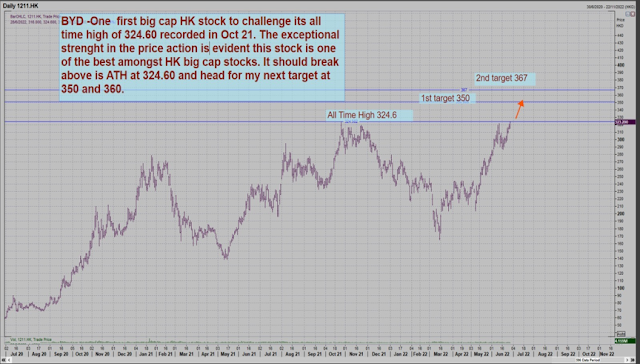 All posts and charts are for educational and illustration purposes only
at 12:54:00 PM No comments:

I don't think the Japanese central bankers can hold out any longer.

Start shorting Japanese government bonds, betting the Bank of Japan will be forced to abandon its super-easy monetary policy that's increasingly isolated from global peers.
The Japanese market will crash along with the bond market when liquidity is tighten. This could be the trigger for the next big crash.
Start shorting the Nikkei, it could happen soon! 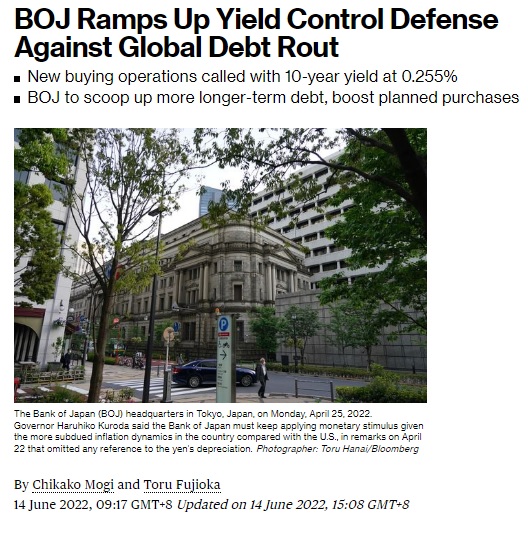 All posts and charts are for educational and illustration purposes only
at 4:07:00 PM No comments:

Is decline in yen due to carry trade ? Or is the market questioning the credibility of the Japanese central bank indiscriminate money printing policies.

The sell-off in the Treasury bond market over the past two weeks, with the 10-year Treasury bond yield rising from 2.70% on 26 May to 3.02%, has predictably triggered renewed downside pressure on the yen and as long as the US treasury yields continue to go higher it will cause the yen to decline further .
What is the key issue here for investor? Is decline in yen due to carry trade or is the market questioning the credibility of the Japanese central bank indiscriminate money printing policies.
How the yen behaves in the next downturn is the crucial issue on which investors need to be focusing.
If the yen hits my next target at 147, it will be unusual signal worth paying attention to and potentially a signal that the monetary madness of the previous decades is seeing its first credible market signal that it will no longer be tolerated.
It could lead to the next Global Financial crisis.

All posts and charts are for educational and illustration purposes only
at 4:08:00 PM No comments:

Glad to be featured as a part of the APAC Trader’s Summit line-up held on Saturday (11 June 2022).

Just in case you missed this it’s just up on YouTube. Tips and tricks dropped!

If you missed the event this is the recording 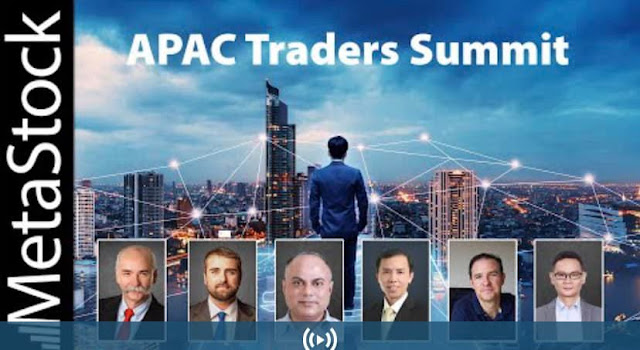 All posts and charts are for educational and illustration purposes only
at 9:31:00 AM No comments:

Bloomberg Commodity Index poised to challenge the year's high after a 3 months consolidation.

Congrats to those who invested in the commodity unit trust under my management since mid 2021 , we are  outperforming every asset class. Ride this mega trend!

All posts and charts are for educational and illustration purposes only
at 4:10:00 PM No comments:

WTI is poised to break out of its 3 months consolidation as Shanghai allowed manufacturers to resume operations from June and Beijing's coronavirus outbreak is under control.
WTI will hit 130 when it breaks above 117 and a longer term target of 147 if WTI is able to stay above 130.
All posts and charts are for educational and illustration purposes only
at 10:38:00 AM No comments:

Inflation finally slows! Does that mean that the market has found its bottom?

Wall Street closed sharply higher as signs of peaking inflation and consumer resiliency sent investors into the long holiday weekend with growing optimism that the Federal Reserve will be able to tighten monetary policy without tipping the economy into recession. Does that mean that the market has found its bottom?

In the 12 months through April, the PCE price index advanced 6.3% after jumping 6.6% in March.

The annual PCE price index increase is slowing as last year's large gains drop out of the calculation.

Inflation past the peak?

Inflation has pass the peak but it will remain stubbornly high. I remain confident that crude oil recent consolidation is getting ready for another parabola spike up to 140 d/b.

Substantial declines in the annual rate of inflation are unlikely to materialise until there are significant improvements in geopolitical tensions (that would get energy prices lower), supply chain strains and labour market shortages. Unfortunately, there is little sign of any of this happening anytime soon – The Russia-Ukraine conflict shows no end in sight, Chinese lockdowns will continue to impact the global economy.

At the moment consumer demand is firm and businesses have pricing power, meaning that they can pass higher costs onto their customers.

The housing components, accounting for more than 30% of the CPI basket, are not likely to turn lower soon. The housing market remains red hot and this feeds through into primary rents and owners’ equivalent rent (OER) components of inflation with a lag of around 12-18 months.

Rent contracts are typically only changed once a year when your contract is renewed so it takes time to feed through.

This situation intensifies the pressure on the Fed to hike interest rates. This potentially means aggressive rate hikes and the risks of a marked slowdown/recession.

The Federal Reserve remains, for now at least, under political pressure to tighten  with the  poll this month which shows that Americans remain far more concerned about inflation than any other issue. A total of 70% of Americans view inflation as “a very big problem”

And the empirical evidence shows that the Fed in the post-Volcker era has been increasingly sensitive to such political pressures. It is certainly not  easy for Fed to talk dovish when the executive and legislative arms of government want to curb inflation as a top priority especially ahead of the mid term election.

All posts and charts are for educational and illustration purposes only
at 1:17:00 PM No comments: