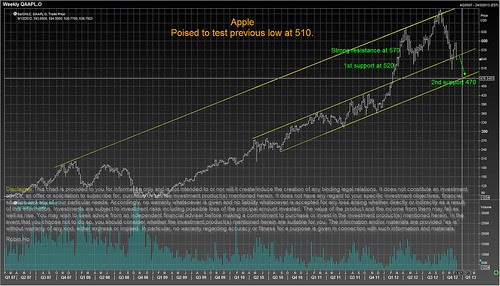 Apple Inc.(NASDAQ:AAPL) is feeling heat of competition from all sides now. The one-time unassailable company is starting to look more vulnerable as companies like Nokia Corporation (ADR)(NYSE:NOK) are determined to make inroads in the smartphone segment while Google becomes a potent force in tablets.

Apple shares fell the most on Wednesday in four years on concerns that it will lose market share to Nokia in China and to Google in the tablets segment.

Research firm International Data Corp had said that Apple’s iPads and iPad Mini will lose market share in 2012 to Google's Android-based devices. It said that Apple’s share of the tablet market will slip to 53.8 percent this year from 56.3 percent in 2011, while Google’s portion will advance to 42.7 percent from 39.8 percent.

Analysts are inclined to call the dip in Apple’s shares to a technical breakdown, after it failed to sustain recent rally.

Consumers are also more likely to experiment with new products in the market compared to the sameness of Apple's devices.

Source: themarketsareopen.blogspot.sg
All posts and charts are for educational and illustration purposes only
at 4:12:00 PM