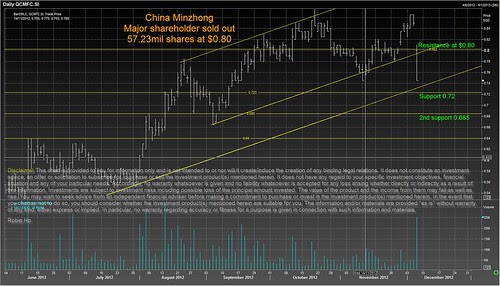 SINGAPORE, Dec 6 (Reuters) - Shares of China Minzhong Food Corp Ltd fell as much as 10.6 percent on Thursday, after a block trade fuelled speculation one of its largest shareholders had sold its stake in the food processing firm.
China Minzhong, which is 16.9 percent owned by sovereign wealth fund Government of Singapore Investment Corp, was trading down 8.2 percent at S.78 at 0225 GMT. It was the most actively traded stock by value. In an earlier block deal, one party sold 57.23 million shares at S.80 each.

A trader said one of China Minzhong's shareholders had sold its entire stake in the company through a private placement.

According to Thomson Reuters data, Olympus Capital Holdings Asia, is the company's third largest shareholder, with 57.23 million shares or a 10.3 percent stake.

Franklin Templeton Investments Corp is the second largest shareholder with a 12.2 percent stake, or 68.13 million shares.

China Minzhong was not immediately available for comment. (Reporting by Charmian Kok; Editing by Richard Pullin)
All posts and charts are for educational and illustration purposes only
at 5:09:00 PM