TINA - A common refrain since the March 2009 market low has been “there is no alternative” (TINA) — a catchphrase used as justification for buying stocks amidst ever higher price-to-earnings multiples where treasury yield are close to zero .

Benchmark Treasury yields definitively broke above 3%, moving further above their four-decade downtrend which intimates a new era has begun. A cold look at the long-term chart shows the next obvious stop should be around 4% The higher yields go, the more appealing they become for many investors and increased fears of a global recession suggests that some may soon consider returning to bonds.

Tina has reversed so has the “buy on dip strategy”. In the recent months “ Sell into strength”  has overtaken  “buying into dip” as a dominant and profitable  strategy . The  continuing weakness of the Treasury bond market, in the face of a hawkish Fed, is the best evidence of stagflationary concerns. It has also reconfirmed the death of risk parity with bonds and equities both down year to date in America. The S&P500 has declined by 9.4% on a total-return basis year-to-date, while the Bloomberg US Long-term (10Y+) Treasury Bond Index is down 19% . The longer this state of affairs continues, the more likely it is to trigger severe collateral financial damage somewhere. A Hawkish Fed  trying to regain credibility remains plain bearish for growth stocks which is why, I have been so bearish on Nasdaq. The forward price-earnings gap between the MSCI AC World Growth Index and its value equivalent has come back down to around 10 points, having reached as high as 16 points in January last year. The bad news is that the long-term average valuation gap between global growth and value shares is about 5 P/E points, something which suggests the premium still has room to shrink even further.

Another danger lurking on  the horizon for  equities is a growing risk of mass redemptions from ETFs with the sell-off exacerbated by the reality that everybody owns the same stocks (Fanngs) because of the socialist monstrosity know as passive investment or “indexation”. This is why I continues to believe this bear market on Growth stocks is in its early innings . 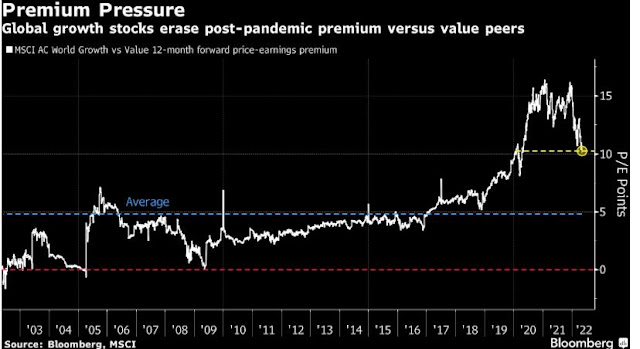 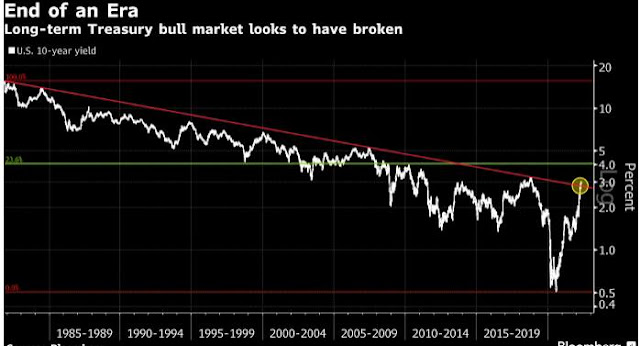 All posts and charts are for educational and illustration purposes only
at 10:46:00 AM