The charts of US Major Indices are showing the narrative that their respective Price Action Trend Cycle are maturing at the same time.

As for Nasdaq-100, it currently trades at the upper band of the Bollinger and 20% premium to its 200-day MA. This is the 18th time the Nasdaq 100 has traded under these conditions with subsequent average pull-back of -0.95% after reaching these levels.

We at the stage of the financial market where the market’s most aggressive energy has gone racing toward “pre-profit” growth companies, long-shot emerging growth and massive SPACs listing and acquisition spree.

Stock like Gamestop or a Plug has been dramatically surging within a one-month period with momentum investors chasing on them.

Such a euphoria bears a resemblance to that of the 90’s dotcom bubble where this sort of thing kept rolling until the Nasdaq doubled in less than a year and a few-hundred IPOs hit the market before an inevitable correction.

Nobody knows when the market is going into a meltdown. However, the ingredients of a significant correction are in place.

The charting model used has been spot on many occasions and there is reason to believe that a correction is impending.

All posts and charts are for educational and illustration purposes only
at 11:42:00 AM No comments: 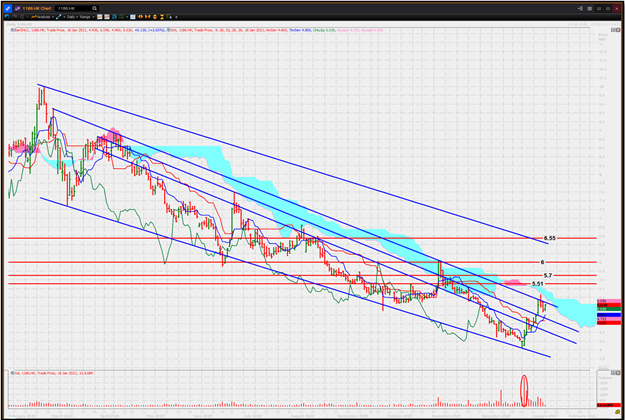 Like China Mobile, CRCC (1186.HK) finds itself being in the crosshair of the US government.

US funds are barred from investing in CRCC as the company is controlled by the Chinese government.

The stock showed potential signs of bottoming from market capitulation (5 January 2021) trading at low of 4.10 after the stock was being removed from the major index providers such as the S&P, Dow Jones, MSCI and FTSE.

The stock has since rebounded by more than 20% after China enacted new countermeasure rules to shield its companies from “unjustified sanction”.

All posts and charts are for educational and illustration purposes only
at 2:53:00 PM No comments: 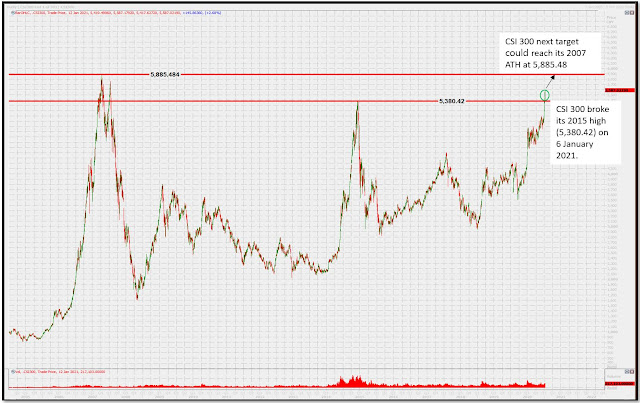 All posts and charts are for educational and illustration purposes only
at 6:18:00 PM No comments: 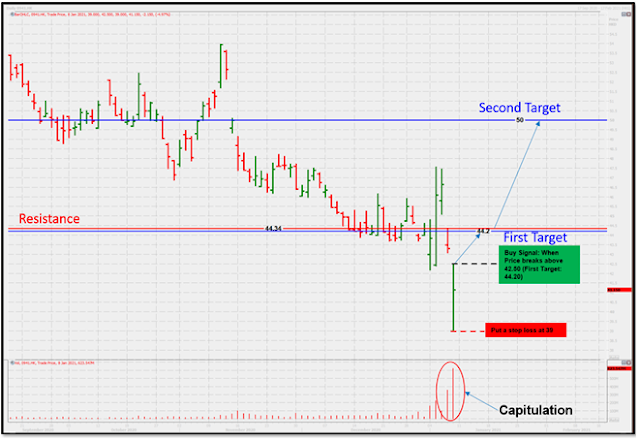 With NYSE delisting China Mobile, global fund providers such as MSCI and FTSE are divesting their holdings in the company. The recent sell off by fund managers has led to the stock trading close at its 15-years low.
The price action is suggesting that the stock could be “capitulating” under massive sell volume. The stock could be bottoming out and potentially provide a window of opportunity for long term investors.
The company currently trades at 41.15 (at the point of writing this article), providing investors a decent dividend yield (based on 2019-20 dividend pay-out rate) close to 8%.
Should price level break above the 42.50, we could see the bulls back in control of the stock and potentially head towards first target level at 44.20.
If prices breakout even further above 44.20, the stock could move towards second target price at 50.
First Target – 44.20
Second Target – 50.00
Stop Loss – 39.00
All posts and charts are for educational and illustration purposes only
at 3:07:00 PM No comments: