Stagflation scare is coming, get ready for it!

A stagflation scarce not seen since the 1980s is coming and we need to be prepared .

“In the absence of government intervention, in the next quarter the price of electricity could increase by around 40%, and that of gas by 30%,” Draghi said.

We can expect for govt intervention globally to help consumers weather the effect of inflation.

Natural gas prices in America and Germany have now risen by 117% and 355% year to date, while the China thermal coal price is up 78%

A severe drought in Brazil is set to ravage orange juice, sugar and coffee adding to food inflation woes .

We can also expect the Fed to stick to their lines that inflation is transitory quoting it’s because of the “special circumstances “ that the world is facing and it will blow away soon . Don’t believe it !

While the Fed is “ kicking the can down the road “ and not doing anything to stop inflation , the world is suffering the collateral damage to economic growth, and households’ real incomes, caused by the ambitious energy transition. The global green effort to curb carbon emission is causing a worldwide shortage of energy at a time the world is reopening from Covid pandemic 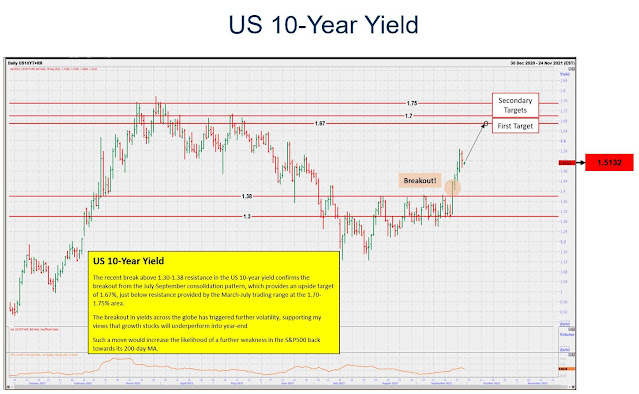 The Chinese government measures to reduce energy consumption are having a dampening impact on growth , power shortages in China have already spread to 20 provinces as they race to meet emission targets before the Winter Olympics in February 2022 .

The continuing evidence in both America and Eurozone of labour shortages, when combined with the energy price surge, is making another inflation scare seem ever more inevitable and in irreversible at least until mid 2022. This should reactivated the cyclical trade in terms of a renewed outperformance of value over growth and by logic be negative for high multiple growth stocks particularly the overvalued tech stocks in the US market . Stay away from overvalued tech stocks for now !

I think the world is caught flat footed this time with the green effort backfiring and the Covid pandemic had added to the problem . What an ironies , the world is faced with a shortage of the second most abundant element of supplies and there is no easy way out , we need to be prepared and bite the inflation bullet . 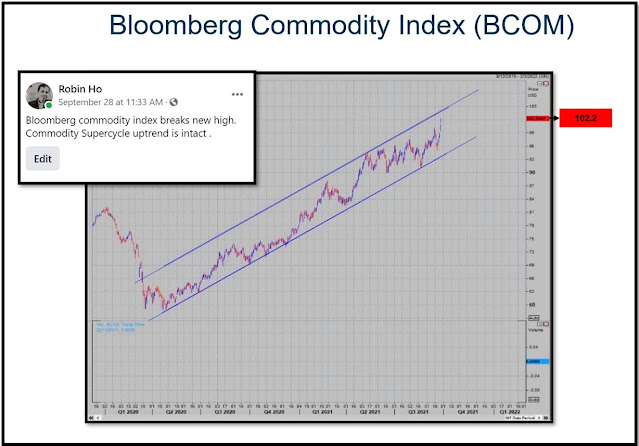 All posts and charts are for educational and illustration purposes only
at 12:58:00 PM